BURLINGTON, ON / ACCESSWIRE / February 9, 2022 / Murchison Minerals Ltd. ("Murchison" or the "Company") (TSXV:MUR) is pleased to announce assay results from prospecting at the Syrah Target, completed during the 2021 fall drill program on its 100%-owned HPM (Haut-Plateau de la Manicouagan) Project, located in Quebec.

Murchison's prospecting program at the Syrah Target consisted of a "beep mat" survey that traced a conductive anomaly on surface over a strike length of 375 metres. The program discovered Ni-bearing sulphide mineralization on surface, along the 375-metre strike length. The mineralization consisted of shallowly buried sub-crops that were exposed with a shovel and sampled by either backpack drill or grab sample. In total, four (4) samples were taken along strike at the target. Early snow fall prevented further prospecting work along the full 600-m strike length of the conductive geophysical anomaly at Syrah.

The observed mineralization consists of approximately 15% disseminated sulphide composed of fine-grained pyrrhotite, with chalcopyrite and pentlandite within a gabbro-norite. The mineralization correlates with a strongly-conductive geophysical anomaly observed in the 2021 airborne VTEM survey. The disseminated mineralization encountered, in the Company's opinion, is not fully responsible for the strong conductive response, and more extensive sulphide mineralization is inferred to be hosted at depth. The conductivity of the geophysical anomaly at the Syrah Target is similar to the Barre de Fer prospect - where massive Ni-bearing sulphide mineralization has been intersected at depth, over a strike length of 300 m, and remains open at depth and partially along strike. 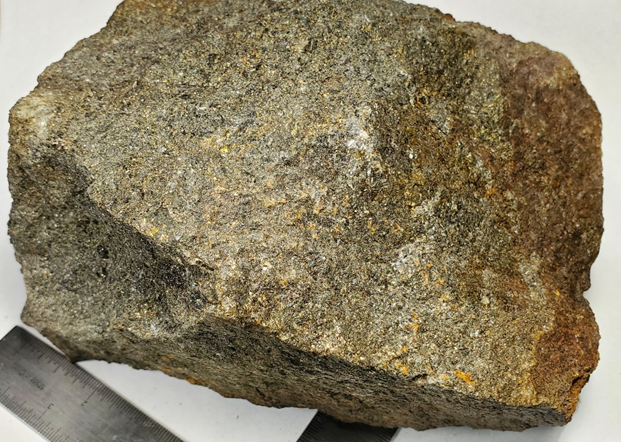 Based on the size and strength of the conductive anomaly at Syrah, the results from the prospecting program, and the similarity of the disseminated sulfide mineralization in parts of Barre de Fer, the Company is optimistic that high-grade nickel mineralization will be found at depth at the Syrah Target. Historically, the Syrah Target was tested with one drill hole in 2008 (HPM-08-14), the hole intersected significant intervals of disseminated sulphide but failed to test the recently identified conductive geophysical anomaly. Modelling of the electromagnetic (EM) anomaly from the recent 2021 geophysics (VTEM) demonstrates the 2008 hole was incorrectly oriented and drilled adjacent to the anomaly. The Company is planning to commence a combined prospecting/drill campaign during Q2 of 2022. One of the key objectives of the campaign will be testing the Syrah Target at depth for high-grade nickel, correlating with the sub-surface anomaly 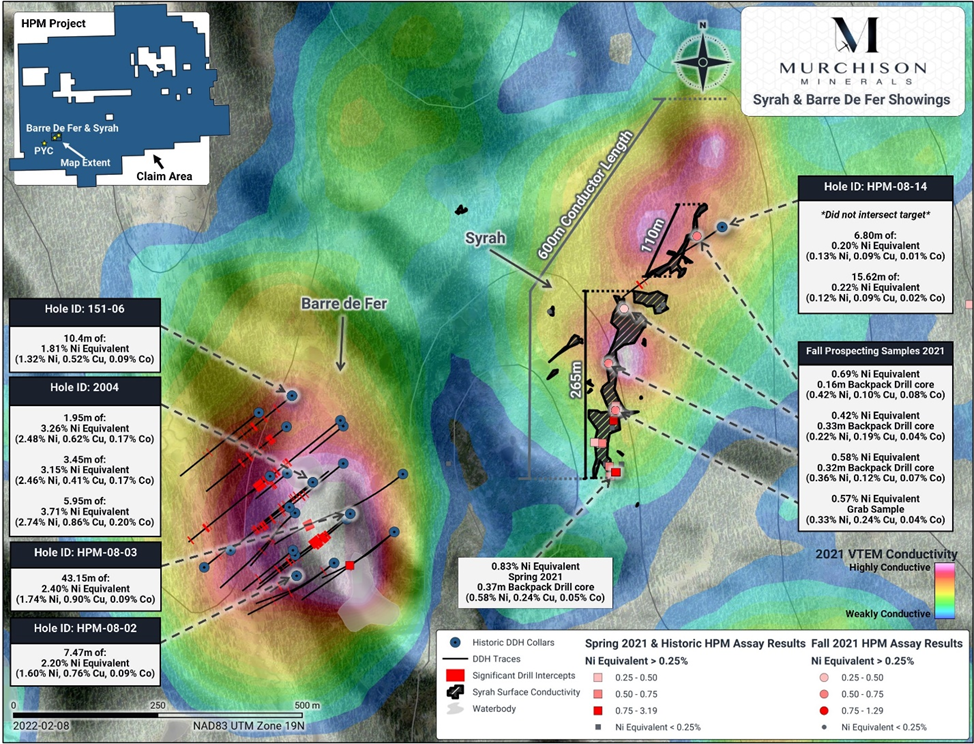 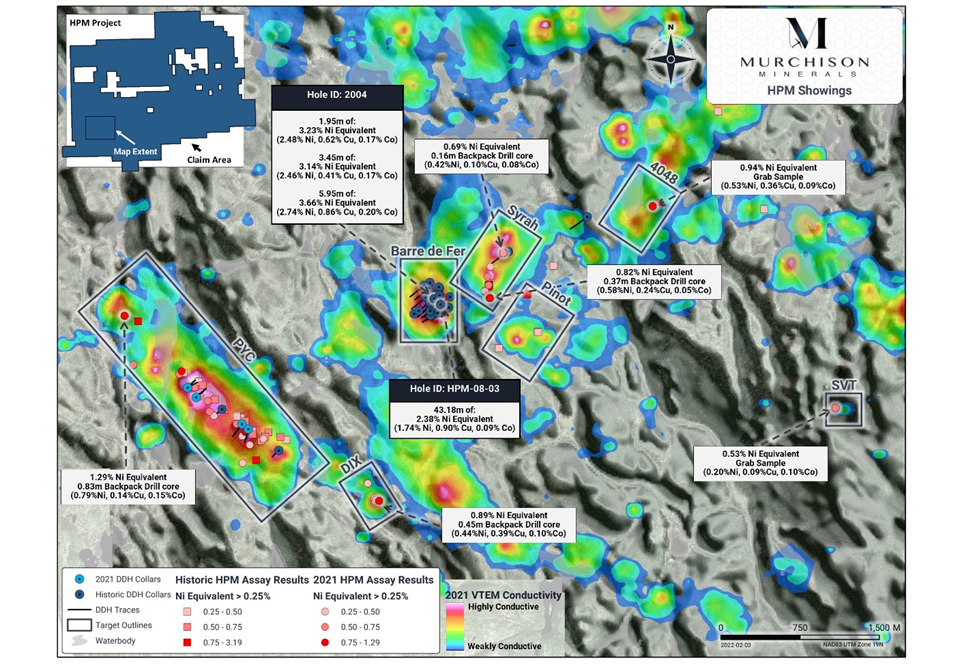 "We are highly encouraged by the early results at HPM, which continue to demonstrate the potential for mining-camp scale nickel-copper-cobalt mineralization. This comes at a time when the need for battery-metals projects in premier mining jurisdictions like Quebec has never been higher. The 2022 exploration plan for HPM includes property-wide geophysics, prospecting, and diamond drilling - the drilling will focus on high-priority targets and will be optimized once the pending assay results from PYC are received in the coming weeks. With the team Murchison has established, the demonstrated exploration process, and the highly prospective targets at our HPM Project we are extremely positive about where Murchison is going in 2022."

"The exploration team is excited to work up the Syrah Target as we feel it has strong potential. Geochemically and geophysically there are compelling similarities to Barre de Fer, and we are expecting to achieve similar exploration results. The prospectivity at Syrah, when paired with what has already been confirmed at Barre de Fer, points to a potentially significant metal endowment. This summer, we plan to unlock this potential with our upcoming exploration program."

The foregoing scientific and technical disclosures on the HPM Project have been reviewed by John Shmyr, P.Geo., VP Exploration, a registered member of the Professional Engineers and Geoscientists of Saskatchewan and current holder of a special authorization with the Ordre des Geologise du Québec. Mr. Shmyr is a Qualified Person as defined by National Instrument 43-101. 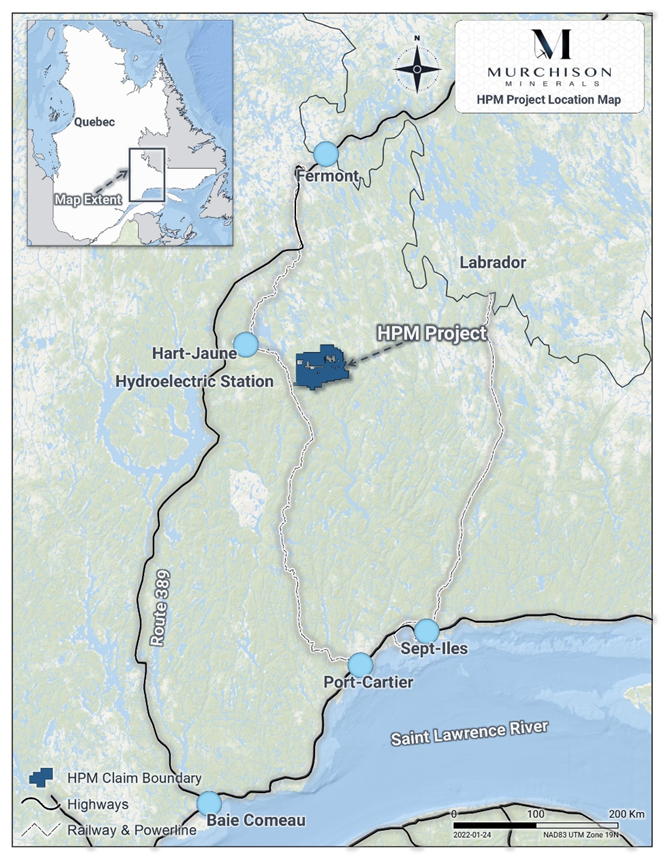 The HPM Project is located within the Haut-Plateau de la Manicouagan area. The claims host prospective gabbroic, ultramafic and anorthositic bodies within the Manicouagan metamorphic complex and are associated with significant nickel-copper-cobalt sulphide mineralization first identified by Falconbridge in 1999, and discovered extensive nickel-bearing sulphide mineralization at Barre de Fer during drilling in 2001 - 2002. Murchison Minerals Ltd.'s predecessor - Manicouagan Minerals - drilled in the area in 2008 and 2009. Most of the past drilling at the HPM Project targeted the Barre de Fer geophysical conductor and confirmed the presence of nickel-copper-cobalt sulphide mineralization over approximately 300-metres strike length to a depth of 280 metres. The mineralization remains open at depth and partially along strike.

After Murchison Minerals Ltd. acquired 100% ownership of the property in 2019, the Company focused exploration work on the camp-scale potential of the region. Aerial EM surveys completed in the spring of 2021 identified more than 50 anomalous conductors. Prospecting crews were able to traverse five (5) of the more than 50 anomalies, and discovered new outcrops of nickel-bearing sulphide mineralization in the process. The prospecting program was followed by an inaugural drill program at the PYC Target area - an EM anomaly with a 1.95-km strike length. Assay results are expected in Q1 2022. Subsequent to the completion of the drill program at PYC, the Company increased its dominant land position in the Haut-Plateau region from 139 km2 to 576 km2.

Murchison is a Canadian‐based exploration company focused on nickel-copper-cobalt exploration at the 100%-owned HPM Project in Quebec and the exploration and development of the 100%-owned Brabant Lake zinc‐copper‐silver project in north‐central Saskatchewan. The Company also holds an option to earn 100% interest in the Barraute VMS exploration project also located in Quebec, north of Val d'Or. Murchison currently has 160.1 million shares issued and outstanding.

Additional information about Murchison and its exploration projects can be found on the Company's website at www.murchisonminerals.com. For further information, please contact:

Murchison Minerals is Granted Conditional Approval by the TSXV for the...