RooGold is pleased to report that it has acquired an additional, 100% held Exploration Licence (EL) 9390 in the highly prospective Peel-Manning Suture Zone of the New England Orogen in New South Wales, Australia.

Carlos Espinosa, Chief Executive Officer and a Director of RooGold comments, "Exploration Licence 9390 is a valuable addition to Roo Gold's tenure portfolio. EL 9390 is 100% held by Roo Gold and was strategically acquired for both its position over the serpentinite package of rocks along the Peel-Manning Suture zone and its close proximity to our Lorne and Gold Belt Projects, making logisitics and work planning more efficient. We look forward to commencing land access negotiations to facilitate field work as soon as practicable"

EL 9390 contains diverse geology that are known elsewhere in the region to host a variety of mineralisation styles that contain Au-Cu and base metal metallic mineral deposits. Rock types include serpentinites, flysch sequences, intrusives, volcanics and volcaniclastics, structurally located within in a complex, highly faulted system. This system may host numerous metallic mineralisation styles including lode gold with associated base metals. The tenement also contains mineral occurrences of copper-rich quartz veins containing malachite, bornite and chalcopyrite in serpentinite dykes up to 150 m long and 12 m wide. The tenement is significantly under-explored, has never been drilled and represents a ground-floor opportunity for the discovery of new metallogenic province. 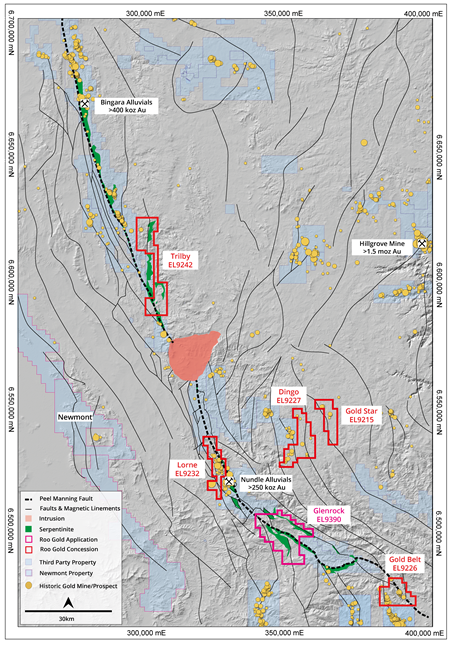 ROOGOLD is a Canadian based junior venture mineral exploration issuer which is uniquely positioned to be a dominant player in New South Wales, Australia, through a growth strategy focused on the consolidation and exploration of high potential, mineralized precious metals properties in this prolific region of Australia. Through its announced acquisitions of Southern Precious Metals Ltd., RooGold Ltd. and Aussie Precious Metals Corp. properties, RooGold commands a portfolio of 14 high-grade potential gold (10) and silver (4) concessions covering 1,537 km2 which have 139 historic mines and prospects.

NEITHER THE CANADIAN SECURITIES EXCHANGE NOR ITS REGULATION SERVICES PROVIDER ACCEPTS RESPONSIBILITY FOR THE ADEQUACY OR ACCURACY OF THIS RELEASE.

Roogold Announces Appointment of Daniel Cohen to Board of Directors

RooGold Announces Results at AGM and Re-Election of Officers

RooGold Announces Appointment of Michael Singer to Board of Directors

RooGold Exploration Plans For Q1 & Q2 For Its Australian Exploration...