VANCOUVER, BC / ACCESSWIRE / July 26, 2022 / BeMetals Corp. (TSXV:BMET)(OTCQB:BMTLF)(Frankfurt:1OIF) (the "Company" or "BeMetals") is pleased to announce its first assay results for its ongoing diamond drilling program at the Kato Gold Project ("Kato" or the "Property") in Hokkaido, Japan. BeMetals plans to complete at least 1,250 metres of additional drilling during this initial campaign and will release their assay results in the coming months.

Note: Intertek Testing Services completed the analytical work with the core samples processed at their accredited laboratory in Manila, Philippines (See details in QA/QA section below). Reported widths are drilled core lengths as true widths are unknown at this time. Based upon current data it is estimated true widths range between 55 to 65% of the drilled intersections.

John Wilton, President and CEO of BeMetals stated, "We are pleased with these initial drill hole assay results from our Kato Gold Project on Hokkaido in Japan. The results from hole KT22-11 represents an approximate 60 metre extension to the strike length of the historically drilled high-grade vein zone which was last drilled in the early 1990s by MMAJ, the Japanese state agency. At this point, we believe there is good evidence that this intersection pierced the interpreted upper area of this vein zone and our second hole which is currently being drilled, is aiming to test a further strike extension of this high-grade vein zone and test other vein targets."

During a recent inspection of available drill core at the Kato Project, including hole KT22-11, Dr. Richard Sillitoe, a world-renowned economic geologist, also an expert on this style of epithermal gold deposits, concluded, "Near-paleosurface and textural features would suggest that much of the historical drilling intersected the relatively shallow parts of the gold system and, based on similar epithermal deposits globally, downward vein extensions and grade continuity seem likely."

Wilton continued, "Given these new high-grade gold drilling results, integrated with the historical drilling data, and the evolving geological understanding of the property, we are increasingly excited by the potential to build a significant gold resource at the Kato Project."

This year BeMetals plans to complete an approximate 1,500 m drill program at the Kato Gold Project. Recently, the Company added another drill crew and helpers to the site in order to increase the team's drilling capacity. These added personnel are expected to continue to improve drilling progress and provide constant geological exploration data and assay results. Hole KT22-12 is currently underway and is targeting additional strike extension of the high-grade vein zone drilled in hole KT22-11, and to test other vein targets.

Figure 1 illustrates the location of KT22-11 on a cross section in relation to the current simplified geological interpretation of this area at the Kato Project. Details of the geological model are evolving with ongoing drilling information compilation, including careful observations of textures intimately associated with the gold mineralization. These observations indicate that historical drilling has generally intercepted the epithermal system at shallow positions, hence significant potential exists to extend the high-grade vein targets in depth. Additionally it appears that the wide but lower grade zones of gold mineralization intersected in some of the previous drilling could be due to overprinting by the upper, steam heated zone of the gold system (See Figure 1).

Due to this improving understanding of the Kato geology, and gold mineralization there is also increased potential to also extend the high-grade veins a significant distance along strike. 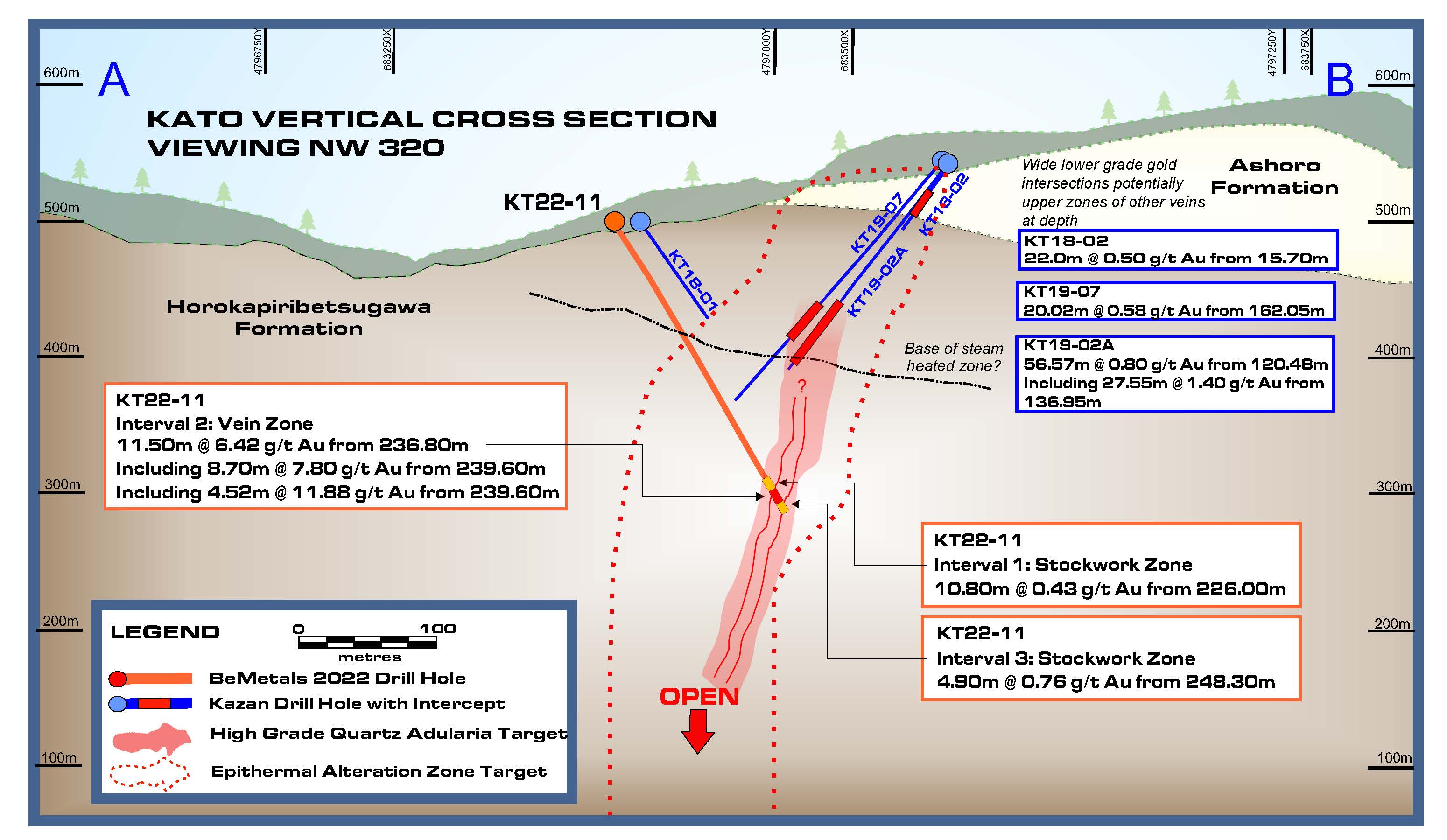 Table 1 below lists the gold intersections in hole KT22-11 which includes the high-grade vein intersections and surrounding interpreted mineralized stockwork zones. Table 2 shows the details of KT22-11 with the hole; azimuth, dip, end of hole depth and collar coordinates.

Figure 2 is a simplified geological map illustrating the location of Hole KT22-11 and its reported drilled gold intersections. It shows the approximate 60m extension of the high-grade gold vein and the position of drill hole KT22-12, which is currently in progress with its planned drill hole trace. The KT22-12 drill hole is designed to test two vein targets. Based upon current interpretation, the immediate target zones for further high-grade gold veins are indicated. It also shows the exploration potential with existing targets, to test the Kato gold system at significant distances to the southeast. 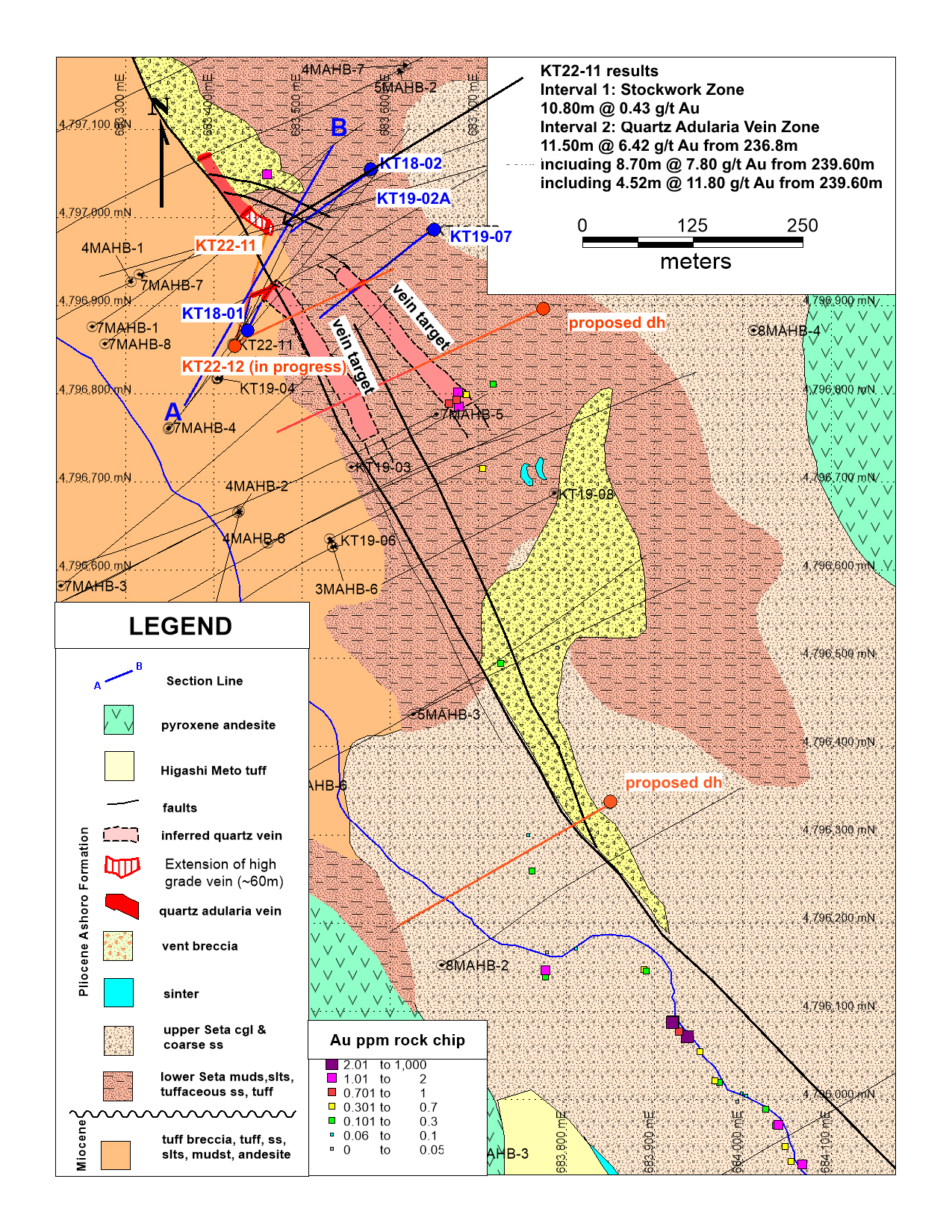 The Kato Project is located within a sparsely populated area of Hokkaido yet it is still in close proximity to infrastructure such as sealed roads and power lines, and has access to supplies and services at the nearby town of Kamishihoro.

The Kato Gold Project is BeMetals' most advanced, of five exploration projects in Japan based on the amount of available historical drilling information, and the Property covers close to 2,000 hectares in central Hokkaido (See Figure 3). The Kato Project (historically referred to as the Seta River Prospect) is an example of a remarkably well-preserved epithermal gold system. Outcropping of clay-altered units are evidence of a high-temperature steam-heated zone above a hydrothermal gold plumbing system. This mineralization style is an example of a low-sulphidation epithermal system and the classic analogy for this mineralization type in Japan is the Hishikari Gold Mine, on Kyushu Island. Global examples of this type of mineralization include mines such as Lihir (Papua New Guinea), Kupol and Julietta (Russia), Waihi (New Zealand) and Masbate (Philippines).*

From 2018-2020, Kazan Resources ("Kazan"), acquired by BeMetals in 2021, drilled several holes at Kato that intersected a zone of hydrothermal breccia near the adjacent main alteration target vein. Their results included hole KT19-02A which returned a number of zones of gold mineralization such as 14 metres grading 2.10 g/t Au.* In 2020, drilling intersected over 50 metres of clay alteration, hydrothermal breccia, vein breccia, stockwork, and banded quartz-adularia low sulphidation epithermal veins in hole KT20-010. That hole intersected 58.9 metres grading 0.76 g/t Au, including 7.4 metres at 2.99 g/t Au, and ended in 2.8 metres grading 3.1 g/t Au.* Due to a lack of inserted bore hole casing the hole was lost in a mineralized zone and is thought to have not intersected the high-grade vein target. 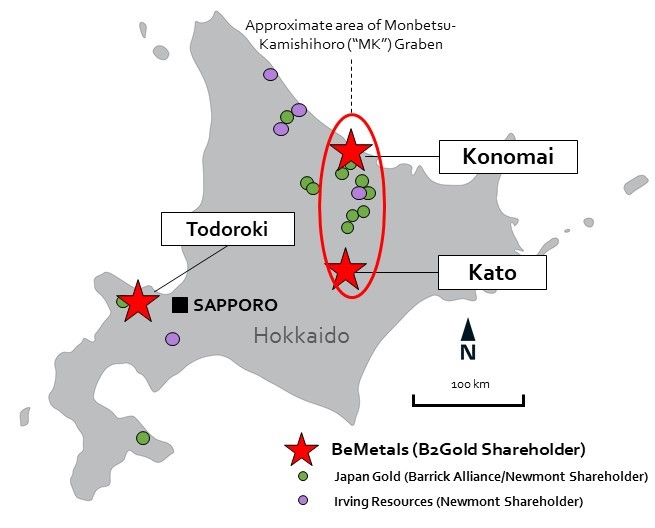 The new results reported here for this core drilling program were analyzed by Intertek Testing Services, an independent and accredited laboratory. Samples were prepared and analytical work conducted in Manila, Philippines. The results were obtained using the following analytical methods as appropriate to determine the gold grades; FA50N/AA of 50g fire assay, with Atomic Absorption Spectrometry ("AAS") finish and FA50GR/GR of 50g fire assay with Gravimetric finish for over limit samples exceeding 10 g/t Au. The core sampling was conducted with a robust sampling protocol that included the appropriate insertion of standard reference material, duplicates, and blanks into the sample stream.

Field operations and management have been conducted by BeMetals' personnel. The core drilling was conducted by Energold Drilling.

BeMetals is a precious and base metals exploration and development company focused on becoming a leading metal producer through the acquisition of quality exploration, development and potentially production stage projects. The Company has established itself in the gold sector with the acquisition of a portfolio of wholly owned exploration projects in Japan. BeMetals is also progressing both its tier-one targeted, Pangeni Copper Exploration Project in the prolific Zambian Copperbelt, and advancing its high-grade, zinc-silver-gold-copper exploration at the South Mountain Project in Idaho. Guiding and leading BeMetals' growth strategy is a strong board and management team, founders and significant shareholders of the Company, who have an extensive proven record of delivering exceptional value in the mining sector, over many decades, through the discovery, construction and operation of mines around the world.

The technical information in this news release for BeMetals has been reviewed and approved by John Wilton, CGeol FGS, CEO and President of BeMetals, and a "Qualified Person" as defined under National Instrument 43-101.

This news release contains "forward-looking statements" and "forward looking information" (as defined under applicable securities laws), based on management's best estimates, assumptions and current expectations. Such statements include but are not limited to, statements with respect to future exploration, development and advancement of the South Mountain Project, the Pangeni project and the Japan properties, and the acquisition of additional base and/or precious metal projects. Generally, these forward-looking statements can be identified by the use of forward-looking terminology such as "expects", "expected", "budgeted", "forecasts", "anticipates", "plans", "anticipates", "believes", "intends", "estimates", "projects", "aims", "potential", "goal", "objective", "prospective", and similar expressions, or that events or conditions "will", "would", "may", "can", "could" or "should" occur. These statements should not be read as guarantees of future performance or results. Such statements involve known and unknown risks, uncertainties and other factors that may cause actual results, performance or achievements to be materially different from those expressed or implied by such statements, including but not limited to: the actual results of exploration activities, the availability of financing and/or cash flow to fund the current and future plans and expenditures, the ability of the Company to satisfy the conditions of the option agreements for the South Mountain Project and/or the Pangeni Project, and changes in the world commodity markets or equity markets. Although the Company has attempted to identify important factors that could cause actual results to differ materially from those contained in forward-looking statements, there may be other factors that cause results not to be as anticipated, estimated or intended. There can be no assurance that such statements will prove to be accurate, as actual results and future events could differ materially from those anticipated in such statements. The forward-looking statements and forward looking information are made as of the date hereof and are qualified in their entirety by this cautionary statement. The Company disclaims any obligation to revise or update any such factors or to publicly announce the result of any revisions to any forward-looking statements or forward looking information contained herein to reflect future results, events or developments, except as require by law. Accordingly, readers should not place undue reliance on forward-looking statements and information. Please refer to the Company's most recent filings under its profile at www.sedar.com for further information respecting the risks affecting the Company and its business.