The Company was able to complete most of the planned work during the three-Phased exploration program which began in late April 2022.

The Company has concluded the Phase III component of the 2022 Summer Exploration Program earlier than planned following concerns raised by the Innu Takuaikan Uashat mak Mani-utenam ("ITUM"), on whose traditional territory the HPM Project lies. By taking this action, Murchison is focussing on continuing dialogue with the ITUM and the Government of Quebec. The objective of the continued dialogue is to establish a path forward which is mutually beneficial to all parties. The Company holds the mineral claims that comprise the HPM Project, granting it the right to access the claim areas and explore for minerals. Furthermore, the Company obtained all necessary permits and authorizations from the Government of Quebec to complete its exploration work during its summer 2022 program. Prior to applying for the necessary permits and commencing work in April of 2022, Murchison began early and on-going engagement with the ITUM. During those discussions, the Company was able to address and accommodate all specific concerns raised.

"Murchison is committed to building active and meaningful relationships and partnerships through open, transparent, and inclusive communication with Indigenous peoples, communities, and stakeholders. Murchison is dedicated to conducting mineral exploration in a sustainable, safe, socially conscientious, and environmentally responsible manner. Murchison seeks to establish a productive working relationship, with the ITUM."

As the world economies transition away from fossil fuels, the need for Critical Minerals like those found at the HPM (Ni-Cu-Co) Project in the Haut-Plateau de la Manicouagan region of Quebec, are paramount. In 2020, the Quebec Government announced the Quebec Action Plan on Critical Minerals, which strives to develop a supply chain for the manufacture of new battery technologies, of which critical minerals are a major raw component. Although, the HPM Project is the early stages of exploration, the Company has already identified a zone of high-grade Ni-Cu-Co mineralization called Barre de Fer (BDF), numerous additional showings identified through prospecting, and over 75 EM anomalies which have yet to be tested. Based on these initial results, the Company believes the HPM Project area has the potential to be a source of these critical minerals. Furthermore, the HPM Project lies within an area that has advanced existing infrastructure: rail line within 8 km and access to Port Cartier, Haut Jaune hydro station within 30 km (potential for any future development to be net carbon neutral), and 40 km from provincial highway 389. 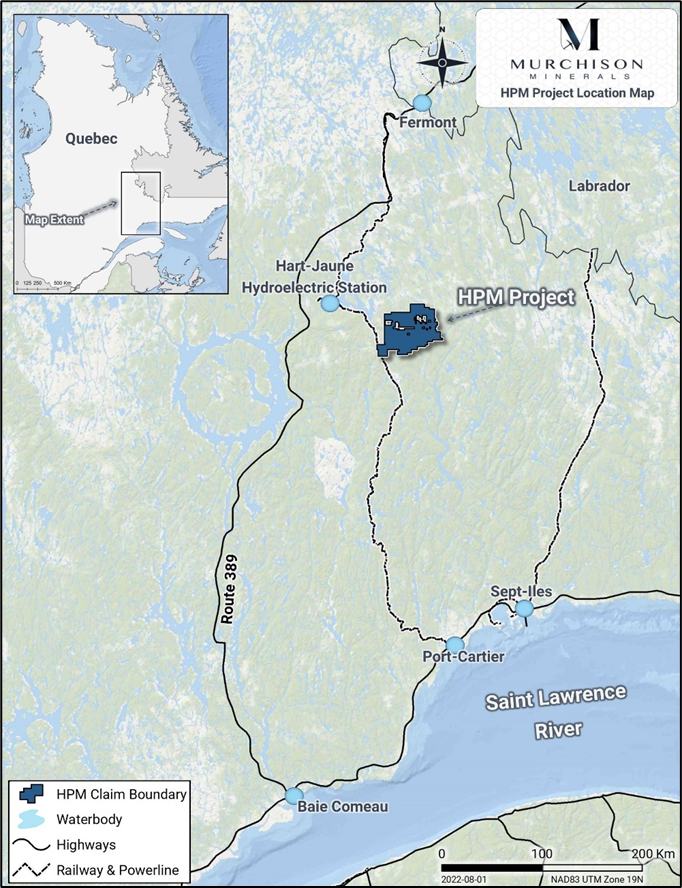 The Company recently completed a comprehensive data compilation, verification and modelling program, comprising all drill hole data from the BDF Zone. The modelling program consisted of developing a preliminary 3D interpretation of nickel mineralization at BDF (Figure 2). Based on the modelling, the Zone outcrops on surface, extends to a minimum vertical depth of 295 m, has a strike length of 315 m, and is composed of multiple stacked lenses over a maximum footprint width of 150 m. Individual lenses have a maximum thickness of 28 m. However, extensive mineralization has been intersected to a vertical depth of 440 m, and the Zone remains undrilled and unconstrained along strike and at depth. No resource estimates have been completed on the Zone to date. 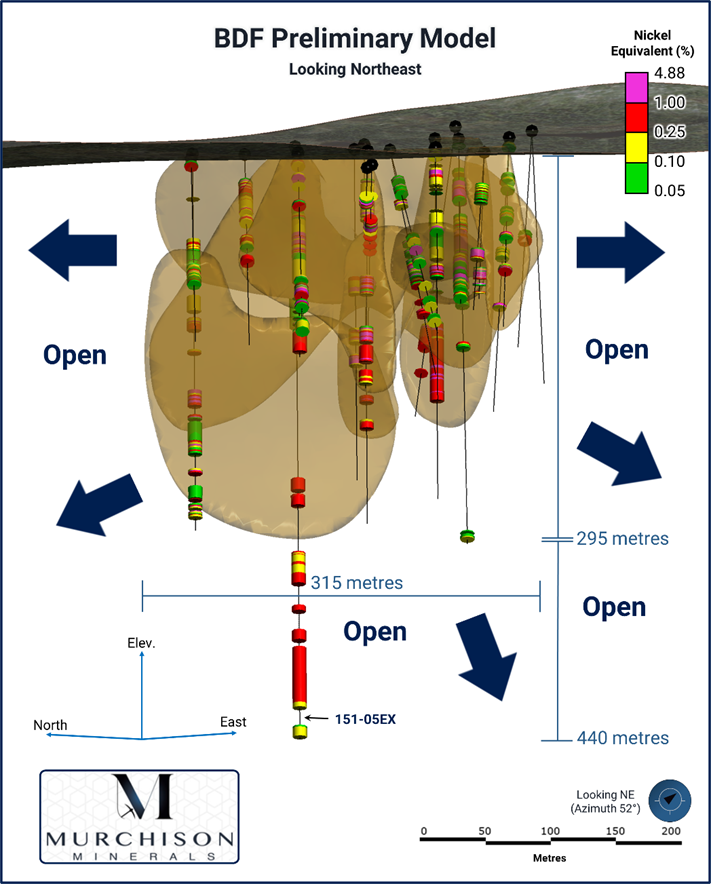 After Murchison acquired 100% ownership of the property in 2019, the Company focused exploration work on the camp-scale potential of the region. Aerial EM surveys completed in the spring of 2021 identified more than 50 anomalous conductors. Prospecting crews were able to traverse three (3) of the more than 50 anomalies, and discovered new outcrops of nickel-bearing sulphide mineralization in the process. The prospecting program was followed by an inaugural drill program at the PYC Target area - an EM anomaly with a 1.95-km strike length. Subsequent to the completion of the drill program at PYC, the Company increased its dominant land position in the Haut-Plateau region from 139 km2 to 576 km2. Finally, as a result of the spring 2022 VTEM survey, completed over the remaining 85% of the HPM property area, the Company further increase its land holdings at HPM to 648 km2.

The foregoing scientific and technical disclosures on the HPM Project have been reviewed by John Shmyr, P.Geo., VP Exploration, a registered member of the Professional Engineers and Geoscientists of Saskatchewan. Mr. Shmyr is a Qualified Person as defined by National Instrument 43-101.

Murchison is a Canadian‐based exploration company focused on nickel-copper-cobalt exploration at the 100% - owned HPM Project in Quebec and the exploration and development of the 100% - owned Brabant Lake zinc‐copper‐silver project in north‐central Saskatchewan. The Company also holds an option to earn 100% interest in the Barraute VMS exploration project also located in Quebec, north of Val d'Or. Murchison currently has 218.2 million shares issued and outstanding.

Additional information about Murchison and its exploration projects can be found on the Company's website at www.murchisonminerals.ca . For further information, please contact:

Certain information set forth in this news release may contain forward-looking information that involves substantial known and unknown risks and uncertainties. This forward-looking information is subject to numerous risks and uncertainties, certain of which are beyond the control of the Company, including, but not limited to, the impact of general economic conditions, industry conditions, and dependence upon regulatory approvals. FLI herein includes, but is not limited to: future drill results; stakeholder engagement and relationships; parameters and methods used with respect to the assay results; the prospects, if any, of the deposits; future prospects at the deposits; and the significance of exploration activities and results. FLI is designed to help you understand management's current views of its near- and longer-term prospects, and it may not be appropriate for other purposes. FLI by their nature are based on assumptions and involve known and unknown risks, uncertainties and other factors which may cause the actual results, performance or achievements of the Company to be materially different from any future results, performance or achievements expressed or implied by such FLI. Although the FLI contained in this press release is based upon what management believes, or believed at the time, to be reasonable assumptions, the Company cannot assure shareholders and prospective purchasers of securities of the Company that actual results will be consistent with such FLI, as there may be other factors that cause results not to be as anticipated, estimated or intended, and neither the Company nor any other person assumes responsibility for the accuracy and completeness of any such FLI. Except as required by law, the Company does not undertake, and assumes no obligation, to update or revise any such FLI contained herein to reflect new events or circumstances, except as may be required by law. Unless otherwise noted, this press release has been prepared based on information available as of the date of this press release. Accordingly, you should not place undue reliance on the FLI or information contained herein. Furthermore, should one or more of the risks, uncertainties or other factors materialize, or should underlying assumptions prove incorrect, actual results may vary materially from those described in FLI. Assumptions upon which FLI is based, without limitation, include: the ability of exploration activities to accurately predict mineralization; the accuracy of geological modelling; the ability of the Company to complete further exploration activities; the legitimacy of title and property interests in the deposits; the accuracy of key assumptions, parameters or methods used to obtain the assay results; the ability of the Company to obtain required approvals; the results of exploration activities; the evolution of the global economic climate; metal prices; environmental expectations; community and nongovernmental actions; and any impacts of COVID-19 on the deposits, the Company's financial position, the Company's ability to secure required funding, or operations. Risks and uncertainties about the Company's business are more fully discussed in the disclosure materials filed with the securities regulatory authorities in Canada, which are available at www.sedar.com. Neither TSX Venture Exchange nor its Regulation Services Provider (as that term is defined in policies of the TSX Venture Exchange) accepts responsibility for the adequacy or accuracy of this release.